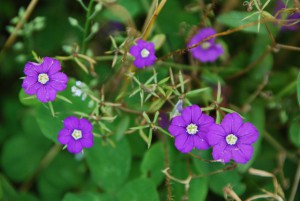 IBLA is sharing its new scientific paper focusing on mechanical weed control in organic soybean cultivation and its effects on the biodiversity of weeds, as part of the project LeguTec.

The period for mechanical weed control has already started for summer crops such as soybean or maize. While the flex-tine harrow or the interrow cultivator are used to get rid of the establishing weeds, you may be wondering to what extend these methods affect the biodiversity of weeds in the field. Within the framework of the research project ‘LeguTec: Sustainable and resource-efficient protein production using various mechanical weed control methods in grain legume cultivation; using soybean as an example’, part of the work has focused on weeds from an ecological point of view. The objectives were to identify and quantify the initial biodiversity of weeds. Additionally, losses of biodiversity due to weed control were quantified and the further development of the weed community assessed.

Five different mechanical weed treatments were tested in organic soybean field trials in 2018 and 2019 on three organic farms (in Hostert, Manternach and Sprinkange): (a) harrowing, (b) interrow cultivator with duck foot shares, (c) interrow cultivator with duck foot shares and finger weeder, (d) combination of (a) and (c), and (e) intercropping of soybean and camelina combined with the harrow. Before and after each weed control, and at flowering of soybean, weed species were identified and counted as well as the number of individuals per species. The level of biodiversity is expressed by the calculation of the Shannon index.

A total of 49 different weed species have been encountered over the 3 soybean fields (due to consistency issues only the data from the sites in Manternach and Hostert for 2018 and 2019 were used for the further analysis), while the individual weed communities per site comprised about 30 species along the growing cycle of soybean. The calculations of the Shannon index reflect common valuesfor cultivated organic fields, generally varying between 1.26 and 2.00 after the first weed control (Shannon Index commonly lies between 0.27 and 1.32 for conventional fields). High values of the Shannon index indicate more diversity, while rarely exceeding 4.00 or 5.00 in natural ecosystems. Mechanical weeding has negative effect on biodiversity, the Shannon index values have decreased. Without exceptions, the tested methods contribute to biodiversity losses. Nevertheless, the combination of the different methods (d) tends to decrease the biodiversity of weeds the most. Results also show that low abundant species, with initial low number of individuals per square meter, are more likely to disappear after mechanical weeding than abundant ones. The most abundant weeds, in the beginning, often remain the most dominant at flowering and can be problematic for the growth of soybean. High abundant species were, for example, Chenopodium album, Fumaria officinalis or Viscia spec. These very abundant species as well as the growth of perennials weeds such as Polygonum convolvulus, Rumex obtusifolius or Cirsium arvense, may be difficult to control. Therefore, it is important to consider the management of weeds all along the cropping system, only a direct action, such like mechanical weeding, is not sufficient to efficiently control weeds.

To know more about the study and have a look at it in more details, you are welcome to read the paper elaborated by our colleagues and published in the scientific journal Organic Agriculture (Springer). The paper, Impact of different mechanical weed control methods on weed communities in organic soybean cultivation in Luxembourg (DOI 10.1007/s13165-020-00296-1), is available for reading here.